The Model–View–Controller (MVC) pattern has been used for several decades to implement user interfaces. And when it comes to MVC Web frameworks, those can be categorized as action-based or component-based. JavaServer Faces is a component-based MVC framework. 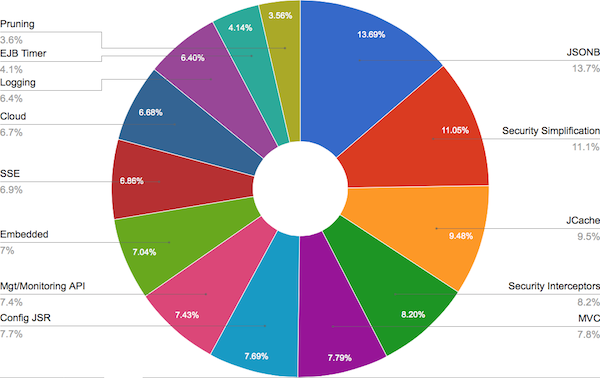 Through the survey, the community has expressed interest in an action-based MVC approach. Santiago Pericas-Geertsen has recently posted a draft proposal for a JSR (‘MVC 1.0 JSR’) that would define a MVC action-oriented framework for the Java EE platform. This MVC JSR is not intended to replace JSF (component-oriented) but offers, instead, a different approach to building Web applications on the Java EE Platform.

One of the goals of the MVC JSR is to leverage existing platform technologies where it makes sense (e.g. CDI and Bean Validation seems obvious candidates for the Model part).

The initial though was to define this (action-based) MVC framework in the JAX-RS specification but after initial feedback and discussions, the general consensus was that a separate JSR would be more appropriate. Technically, JAX-RS is still one of the option for the Controller part but everything is open and will have to be discussed in the EG. The outcome of those discussions might be that something else is needed for the Controller, or that there’s a way to define a Controller independently of the underlying technology and JAX-RS would then be ‘plugged’ in, we will see… One thing is clear, defining a new template language is not in the scope of the MVC proposal!

In terms of planning, Santiago is looking for supporters before he submits the proposal to the JCP. The JSR itself is aligned with the Java EE 8 planning.

Originaly posted on The Aquarium blog.